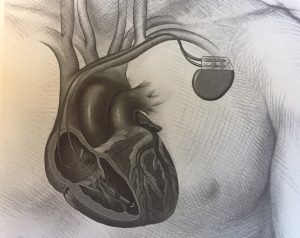 The leads are inserted by accessing the vein that runs under the collarbone and xray was used to visualise lead positioning. Once the leads are positioned in the heart, the leads and pacemaker are tested to make sure they are working properly before skin closure using absorbable sutures.

The pacemaker system will be checked regularly in clinic and the pacemaker battery usually lasts between 8-10 years. It cannot be recharged and a new pulse generator change will be required when the battery is near depletion. Local anaesthetic is used for this procedure and sedation will also be given for patient comfort. It is not advisable to drive for two weeks after permanent pacemaker insertion.

There are potential risks with this procedure. They include but are not limited to the following:

Today’s devices have many features which assist patients. At CHC, the effective programming of the device will help optimize performance and generally prolong the battery life of the pacemaker.

Let’s see what your device can do for you!